The Argentine Volleyball Federation (FeVA) is pleased to announce that Javier Weber will continue to coach the Argentine national men’s volleyball team. This and other volleyball news read on Worldofvolley.com. 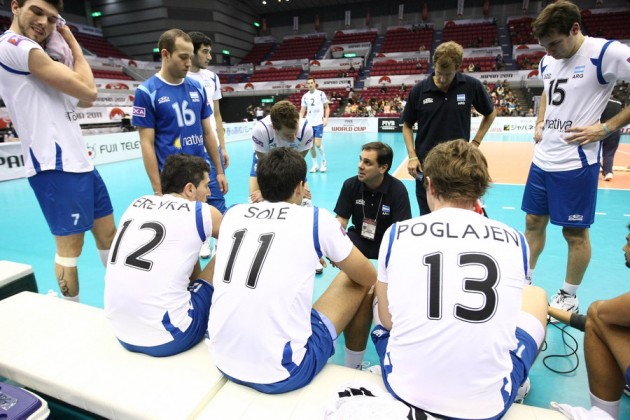 Javier Weber briefs his players during a time out

FeVA‘s Board of Administration decided to continue the successful partnership for the next Olympic period, which will see Weber continue coaching a team he has led since 2009.

“Given the statistics and our satisfaction with Weber’s job from the start, there was no doubt that FeVA wanted Javier Weber in charge of the team,” said FeVA President, Juan Antonio Gutierrez.

“We had to wait for confirmation from our Board of Administration that met last weekend and whose members voted unanimously to continue with Weber. Our future is now bright and the board endorsed his outstanding job. He also has the important support of the CNARD, the Olympic Committee and the Sport Secretariat. These three bodies have understood from the start that Weber was the best choice for the development of volleyball in the country,” finished Gutierrez.

Javier Weber’s emotion and excitement was evident. “It is great to have everyone’s support and the result has made me very excited. At the same time I feel great responsibility and motivation to multiply the work done until now. We have a common project and it is important to do a good job together. In the first period of our work we built Argentina into one of the most powerful volleyball countries in the world. We will now try to maintain this and continue to grow our talented players,” he said.

In Weber’s first year as coach in 2009, Argentina qualified for the first time for the Final Round of the FIVB World League, held in Serbia. The following year Weber changed players, to create a winning national team and the results have showed ever since.

The Argentine national men’s and boys’ teams have obtained outstanding international results at different levels of competition, including a gold medal at the Odesur Games, bronze at the 2011 Pan-American Games, and second place at the 2011 Junior World Championship. There were also two bronze medals for the Junior and Youth teams in 2009 one silver medal at the 2010 Youth Olympic Games.

Weber’s official four year period will begin in 2013 when the details of his work plan will be made known.