Argentina: Drean Bolívar against UPCN Volley, the great battle of the last finalists 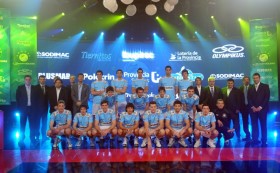 This Thursday  starts the fifteenth round that will begin the ninth weekend of the League Volleyball Argentina Native Card Nation 2011/12 with the great big game between Drean Bolivar and UPCN Volley Club, which will be transmitted  live on ESPN from 22h onwards.

The local club will expose the tip against the team that comes from San Juan that comes to win in its  last four presentations.

However, “xeneizes” are coming back and want to continue rising up on the scoreboard.

For its part, La Union de Formosa tries to reverse the situation of two consecutive losses at home from the 21h against Catamarca Volley.

The players from La Union de Formosa are still the third on the scoreboard but 5 points behind the leader, while the team led by Gerardo Fernandez did not come down from the fifth place.

At 21:30, Sarmiento Santana Textiles and Jujuy Volley are meeting in the stadium Alejo Gronda.

Both have lost in their earlier games (UPCN Volley with 3-2 and Boca Rio Uruguay Seguros with 3 to 0, respectively) and seek a win to turn things around.

PSM and MSM Bella Vista volleyball will face off at 21.30 in the Paraná Stadium.

Both teams are still fighting for the place in the playoffs and  for both it will be the determinal game to meet their expectations.

Meanwhile, Gigantes del Sur are looking for a triumph over Lechuzas Villa Maria, the team that  sprung the surprised on the last date when defeated La Union de Formosa.

Both teams are in the squad down and need to add  to relegation.

The schedule of the matches …