UPCN´s outside hitter got another victory against important European clubs this Thursday when the Argentinian team defeated World Club Champion Trentino Volley. 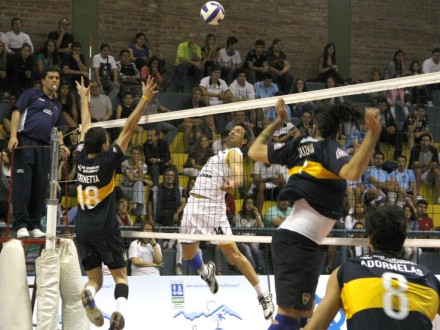 Filardi is one of the new faces of UPCN and seems that he brought the luck. He has a long history of triumph against the powerful clubs of the Old World in the Bolìvar`s shirt. The player from Cordoba reached Argentine League three times winner as a replacement for his compatriot Pablo Bengolea this season. He has started his career in his native province and gained experience in Velez, Alianza Jesus Maria and Spain, among other clubs, but in Bolivar was his final explosion.

In 2006 he was summoned by Javier Weber to form a dream sextet and achieves international success. After the club did not win any battle in three years against Brazilian rivals, Bolívar was crowned undefeated champion of a tournament in Brazil and started a “paternity” over a great champion of that country: Cimed. Not content with that, Filardi starred in a tour of Italy and Spain in which beat Cuneo, Montichiari and Drac Palma Portol in summer of 2007.

In 2008 the franchise returned to raise a cup called World Challenge (in which played teams from Europe, North and South America) and held it the following year in the United States defeating the Korean champion.

In 2010, Bolivar won the FIVB South American club championship (again in the final with Cimed) and qualified for the World Championship in Qatar. There, began the regular season surpassing U.S. team and took a bump to the European Runner Russian Zenit Kazan. Then reach the fourth place, the best Argentine team record so far.

Now Filardi already qualified again to a semifinal with UPCN and seeks to overcome his brand. What is clear is that luck is with him.