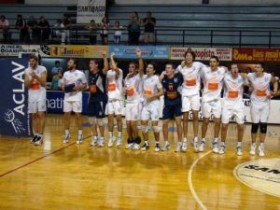 In 1. set, Olimpico had a good start of 8:7. However, Andres Martinez of UNTreF scored to 18:14. The coach Julio Gimenez called timeout with the score of 21:16 for the opponent. Thanks to Leonel Cortez and Andres Ferreyra UntreF closed the set with 25:18.

In 2. set, Olimpico of Alejandro Kolevich took the lead of 8:5.
Then Jairo De Souza scored 3 straight points and after the service of Angel Verzalli the hosts went to the second technical timeout with 16:10.

In 3. set, the game was played point by point, until Olimpico got to 13:11 with great effort. A great defense and the contributions of Rio Caio Maluf and Jairo were vital for the hosts. Thanks to the reception of Gesualdo, Ciclista got to 21 points. Then, from losing of 24:25 got to 26:25. However, UNTreF turned the result and won the set with 28:26.

However, Ciclista will have a new chance to get a place in Liga Argentina Card Native Nation. In in playoff it will face Lechuzas Villa Maria. The first two games of a series that will define the best of five, will be played on 10. and 11. March in the stadium “Central Union”.

Japan: JT Marvelous out of playoff

ARG W: Boca Juniors defeated Estudiantes and is one step from title