ARG W: Boca Juniors defeated Estudiantes and is one step from title 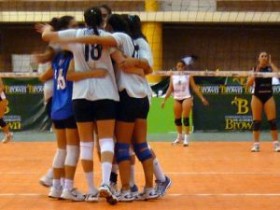 Arianne Tolentino had a strong attack and Estudiantes were not able to stop Brazilian. It is no surprise that “Xeneize” reached the first technical timeout leading with 8:4.

Getting to 16:12 until the second timeout and then 19:14, Boca was bound to win the set. Jimena Perez and Natalia Aispurua were effective in block and exaggerated the difference in score. Thus, Boca won the first set with 25:15.

The second set began evenly from 4:4 to 8:7 until the first technical timeout. Estudiantes took a small advantage (14:16 and 17:20) thanks to the libero Antonella Tabarez (the most prominent in defense) and Yaccuzzi Luisina.

However, they were unable to close the set and Boca took the lead of 8 points winning the set with 25:21.

In the third set the result was 8:7 after the first technical timeout. Then 12:13 and 15:16 thanks to the great block of Juniors.

Celeste Dri and Juliet Puntin improved the percentage in positive defense. In the counterattack did the same Yaccuzzi and the sisters Florence and Agustina Sanchez.

Meanwhile, Clarisa Sagardia entered instead of Sabrina in order to stop the increasing difference in score. After the second technical timeout (15:16) Estudiantes lost important points and Boca did not miss that opportunity. After 20:18, Boca scored 5 points taking the second victory of the series and it needs one more to win the championship.