The team of Drean Bolívar moved to Colon (Entre Rios) where it will face Boca Rio Uruguay Seguros for the third semifinal match in Argentina Volleyball League. 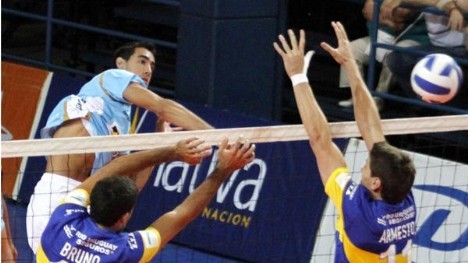 The team led by Javier Weber will face Xeneize on Thursday and Saturday in the series of five games. Up to now, both teaams are even in series.

Weber is very concerned with the condition of Vladimir Jekic, who injured the right ankle. The Serbian setter had his first season in the country last Friday. He twisted his ankle and was replaced by Gaston Giani. He is one of the most important players of the attack of Bolivar. Jekic has earned the respect and affection of his teammates and the fans, by getting used to to a new environment and learning the language very quickly. Dr. Solari said that despite the severity of the injury, he will play in the semifinals ahead.

Drean Bolívar won the regular season and eliminated Puerto San Martin Voley supported by the “scoring” of Evandro Guerra, who is the tournament’s leading scorer (528 points) with 49 aces.
On the other hand, Boca qualified on the fifth place and showed great collective and individual performance. Nicolas Bruno is the 10th leading scorer of the tournament and the second best in reception. In addition, Nicolas Uriarte recorded 30 aces and Juan Pablo Hattrick is the fourth most effective attacker.