The team of Boca Rio Uruguay Seguros trevels to Concepcion del Uruguay where it will receive Drean Bolívar on Thursday and Saturday in 3. and 4. match of the semifinals of the Argentina League. 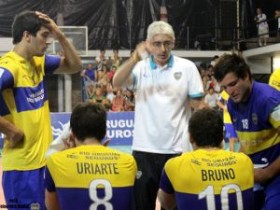 On Thursday in Parque Sur Xeneizes will receive Eagles in the first game that promises to be exciting and supported by many  spectators. Regarding the first two matches in the city of Bolivar, Marcello Gigante expressed his feelings: “In 1. game we played almost perfectly. We were great both collectively and individually. We knew it would be very difficult to play on that level in 2. game.”

Asked about the week ahead Gigante said: “We work hard to bring good out of the first game and correct the errors of the second, thus securing the chances of getting positive results.”

The captain of Xeneize, Nicolas Bruno, said: “We should not worry about the second game, we must pay attention on how we will play in the following game. So, if we are not under pressure it will be much easier for us to play well. “