In a new demonstration of high quality, Argentina defeated quite easily Columbia 3-0 (25-21, 25-15, 25-20) at the South American Men Olympic Games tournament. Federico Pereyra, Sebastián Solé and Liberman Agamez, were the top scorers with 10 points each. Tomorrow, at 21.00 Argentina will face Venezuela for the qualification for London 2012. 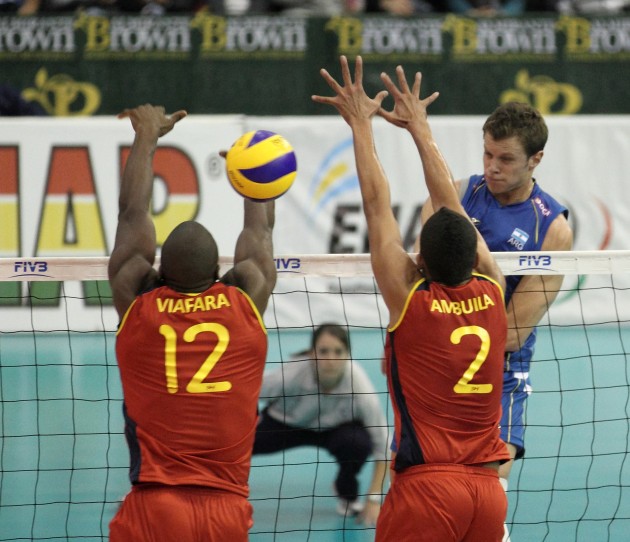 Both teams started risking serving and with two killing serves in the hands of Jaime Viafara, Columbia reached the first TTO 6-8. The team coached by Horacio Dileo once more got an ace, this time done by the setter but coming from behind and with an illuminated Federico Pereyra Argentina got the lead 11-10. Without showing its best performance, the host team made good use of Columbia mistakes and reached the second TTO 16-14. Two outstanding consecutive blockings of Solé widen the leadership closing the set Rodrigo Quiroga‘s spike.

Argentina kept hurting on the second set with his serving but Columbia once more reached first the 1st. TTO 7-8. Between Solé and Luciano De Cecco, with a spike and an ace, got the leadership for the team coached by Javier Weber 13-10. Facundo Conte and Pereyra kept with killing spikes and a blocking of De Cecco gave a five point lead on the second TTO with Solé closing a very easy set when Columbia could hardly concentrate while Argentina grew.

The third set started levelled but after the 1st. TTO 8-7, three aces of Quiroga gave Argentina a clear lead cheered by the audience with the score 13-8. Thereafter while the light blue – white jersey team kept adding points with all outputs, Dileo could not make his players react. A new blocking of Solé and a mistake serving of Sergio Gaitán closed the set and the match.