Argentina and Dominican Republic in Pool A and Brazil and United States in Pool B, all came out winners in the first day of action of the Men’s Pan American Cup on Monday. 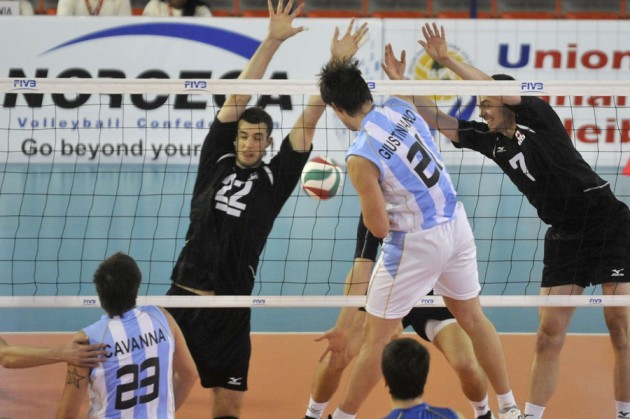 The eight-team competition will qualify the best ranked team, not already included in the 2013 FIVB World League, to the WL Qualification Tournament later this year.

Mariano Giustiniano of Argentina led the scores with a match-high 26 points, followed by his teammates Gonzalo Quiroga (20) and Gonzalo Lapera (13). Canada’s Dane Pischke had 22, while Steven Marshall (19), Maxwell Burt (13) and Christopher Hoag (10) completed the scorers in double digits.

The superiority of the Brazilians showed in the advantages they got in attacks (34-27), blocks (8-1) and aces (11-2). Brazil’s Mauricio Borges topped the scorers with 15 points while teammate opposite Cargnin added 10 and middle blocker Gustavo Bonatto 10. Daniel Vargas scored 11 for the losers.

The winners relied on a well balanced offensive led by Daniel McDonnell and Taylor Sander each with 12 points, while Antonio Ciarelli added 10. Venezuela’s captain Kervin Piñerua had 11 as the only in player double figures for the losers.

Dominican Republic overcame a resilient Trinidad and Tobago in Pool A with a straight sets (25-13, 25-19, 30-28) victory in the last match of the opening day.

Dominican opposite José Miguel Caceres was the top scorer with 19 points, followed by Elvis Contreras with 17 and Elnis Palomino with 11. Veteran Nolan Tash once again was the most distinguished for his team registering 14 points while Marc Honore scored 11.