After eight years of very hard work, the club of Crvena Zvezda BEOGRAD will be represented in Europe’s most elitist competition, i.e. the CEV Volleyball Champions League, by its men’s and women’s teams. These circumstances did already turn into reality back in 2004 and by repeating this feat Crvena Zvezda represents a unique success story in Europe. 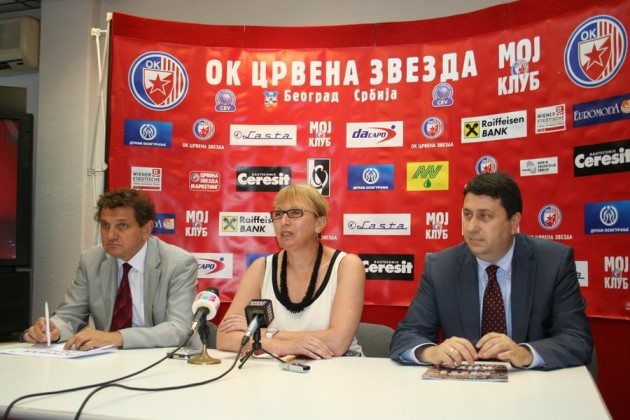 The participation in the CEV Volleyball Champions League is a matter of prestige, requires strong commitment but at the same time turns into a kind of quality certification for all clubs. Some 100 days before the start of their campaign, the officials of Crvena Zvezda unveiled a special action under the motto “October 2012” whereby they intend to create awareness around this event that will bring some of the world’s finest Volleyball players to the capital city of Serbia. The goal of this action is also to get together a group of sponsors that will be supporting Crvena Zvezda along this adventure.

Ana Avramovic, Secretary General of the club, said to the media: “Maybe it sounds a little strange that we are discussing about the European Cups and the CEV Volleyball Champions League in July but we are taking this adventure very seriously and we understand the demanding task we are being confronted with. Starting from this coming October we’ll be hosting six international teams here in Beograd and our teams will be traveling for some 20’000 km and in order to sustain all the costs resulting from this campaign we need to join forces with some strong partners”.

“The participation in the Champions League is a unique opportunity to develop our players and we want to attain this goal in a spirit of fair play. We are also very proud to see that our players are being scouted and sometimes contracted by other clubs, it shows the quality of our work” added Mr. Zoran Manasijevic, the Vice President of Crvena Zvezda.

“We do hope the media will understand the intentions of a club that has such a long tradition” concluded Marketing Director Zoran Avramovic. “Via this campaign we shall be able to draw the attention of top companies and make them ready to stay at our side. Crvena Zvezda shall enjoy the support of everyone because this club has been traditionally growing and developing a large majority of the players included in our national teams”.