The Argentinian runners-up, Personal Bolívar, began 2016 furiously by achieving two consecutive wins in the national championship. Their expectations are even higher now as they brought new opposite. 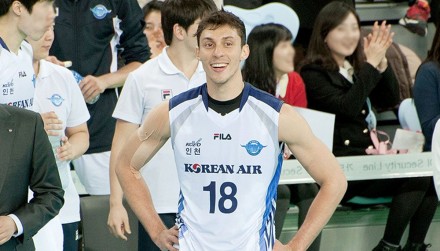 Bolívar closed the signing of Cuban Michael Sánchez Bozhulev, who comes to play the second part of the season including playoffs.

The 29-year-old Ukrainian-born opposite comes from South Korean team Korean Air Jumbos with reputation of a scoring record holder – he holds the world record for points scored in one set. Playing for Jumbos against Rush&Cash in the Korean league he scored 31 points in one set, which was the longest set in the history of volleyball. It ended for the team of Sánchez (56-54).

He played for the Cuban National Team that won the bronze medal at the 2007 Pan American Games and participated in three editions of the FIVB World League. Sánchez took a few medals on a club level as well.

He parted ways with Jumbos in early December after suffering a hand injury, but already quite recovered and will be available soon for Bolívar.

No Muserskiy, but there’s Volkov: What an oustanding way to bypass block! (VIDEO)

It’s like that in Korea: you can be the best scorer but once you get injured they send you away and take another!