Argentine Volleyball is very proud, among others, in this London Olympic Games 2012 with Rolando Cholakian participating as international referee for Indoor matches. Not only the Argentine Seniors' Men returned to playing after eight years, the women beach volleyball qualified to participate for the first time at an Olympic competition and Argentine referees were named for Indoor an beach volleyball matches. 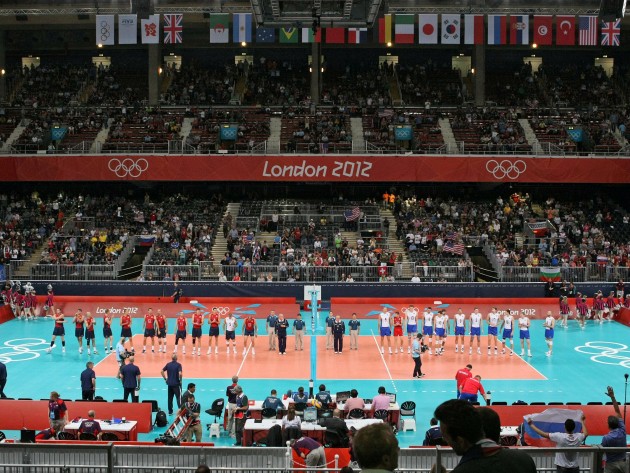 Cholakian at the opening ceremony of the match USA v Russia

Rolando Cholakian, one of Argentine International Referees is representing the country as he did in the last years at very important competitions and the Cordoba referee in London expressed great feelings on his first Olympic Games participation as referee. “I am enjoying it but mainly it is a big responsibility to be part of such an event. It is the greatest competition in the World and we must be at its level. We have prepared ourselves to reach this point during our whole career and when the time comes we are named we answer with our utmost responsibility to our duties“.

Throughout the television broadcasting, Cholakian could be seen in very important matches of Pool B – as he is Argentinian he is not named for any match of his country’s Pool A. For example he was part of the referee team in clue matches like USA v Russia. “Luckily, I participated of great matches until now, but really I believe all are very important matches” he added.

I live not nearby where the matches take place so it is pretty hard to reach Earls Court. “We can take the Olympic Bus that travels throughout the Olympic Way or by underground, that is quicker so as most referees do, we chose the underground” said Cholakian mentioning something that has to do with the organization but not the matches themselves.

No doubt, the presence of Cholakian at the Olympic Games gives prestige to Argentine refereeing and this talented international referee while participating of the games adds: “In Argentina we have very good and lots of referees that always live Argentine refereeing at a good level. Personally, my goal is to do my work the best I can match after match. Then, I will see how far I can reach“.

NORCECA W: México open with a victory over Guatemala

ARG: Santa Fe closed a week full of training at the 2012 Coaching Congress