With its second consecutive victory at the South American Youth's Girls Championship Argentina qualified for one of the semi-finals. Argentina this Friday afternoon overcame Uruguay at the Miguel Grau Coliseum del Callao, in Peru, 3-0. Read latest volleyball news on Worldofvolley.com. 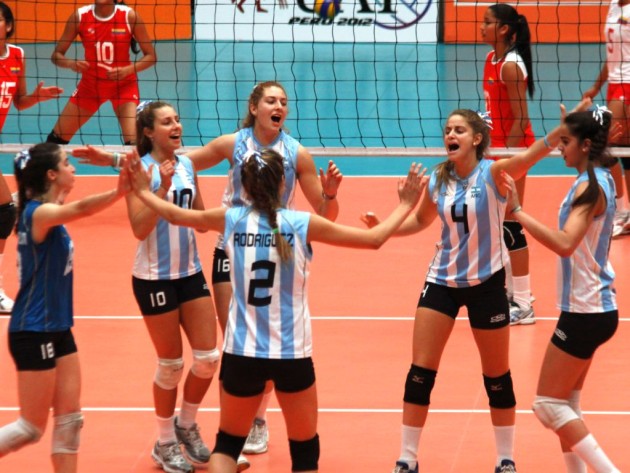 Argentina this Friday afternoon overcame Uruguay at the Miguel Grau Coliseum del Callao, in Peru, 3-0 (25-12, 25-18, 25-15). Again, Sol Piccolo was the top scorer of the match with 14 points. This Saturday, the girls will play for the top place of the preliminary phase in Pool B with the other qualified team, Brazil.

Argentina had a great start with Uruguay finding its momentum at times and making it hard but then, Argentina reacted winning easily the first set.

In the second set, with many non-forced errors of the Uruguayan team the set became even more interesting even though they could never got the lead and only stand nearby in the score at some moments.

On the third set both teams were more concentrated and the non forced errors were reduced drastically. Anyhow the light blue – white team finished easily the match qualifying for the semi-final no matter the result of the third and definitive preliminary round match.

Luis Baladon,Uruguay coach: “At the beginning we were in the match but then lost concentration. We did not show blocking, that yesterday we had against Brazil. They spiked very well, injuring one of our players, the setter, Carolina Peixoto”. “Now as she is Uruguayan she will go on playing no matter how much it hurts”.

Argentina did not allow Uruguay to get as many points as against Brazil and Gullermo Caceres the coach was very happy. “We did not play at our level but we obtained a good victory. Uruguay is a good team that fights and never stops trying to win so it is good for my girls to play against such a team. Now that we are in semi-finals we have to fight for one of the places at the World Championship”.