Brazil: Giba to have surgery to get fit for London Olympics

Brazilian volleyball legend and captain Giba will be out of action for up to three months as the wing spiker will undergo surgery on February 13 on his lower left leg. The surgery is deemed necessary in order for him to be fit enough to play at the London Olympic Games in July. 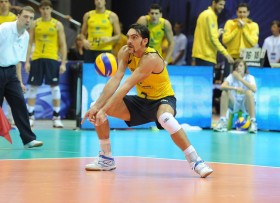 Giba was part of the Brazilian gold medal winning team at Athens and captained Brazil when the world No. 1 team lost to USA in the final in 2008

Giba, who was part of the Brazilian gold medal winning team at Athens, and captained Brazil when the world No. 1 team lost to USA in the final in 2008, experienced problems with his tibia for the first time in September during the South American Championship and although he helped Brazil qualify for the 2012 Olympic Games when the world champions finished third at the 2011 World Cup in Japan in December, he has had limited playing time in the Superliga, Brazil’s national championship.

“I’m not happy about being away from the court,” Giba, 35, said. “I wondered if I could help (my club) Cimed/SKY, but I have to think about my career and, as this is an Olympic season, the best thing to do was to accept the surgery.”

Brazilian team doctor Ney Pecegueiro, who will be in charge of the procedure, believes that three months will be enough for Giba, who also led Brazil to the FIVB World Championship title in 2010, to be back on court.

“Talking in simple terms, Giba’s tibia fracture was not healing,” he explained. “In the surgery, we will attach a titanium rod to his bone to keep it immobilized. This way, he will be able to resume practice in two or three months and we believe he will be fully healed for the Olympics.”

Brazilian coach Bernardinho hopes to have his captain in good shape for the most important tournament of the year.

“We need to understand the importance of this surgery as he needs some time to recover prior to the Olympics,” Bernardinho said. “Giba is one of our key players and we are confident he will be ready to play in London.”