After losing in the tie-break against the national team of Russia, Brazilian coach Bernardo Rezende was mostly angry at the Russian wing-spiker Alexey Spiridonov and also at the referees because of the way they did the work. 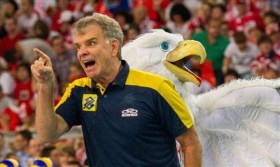 Spiridonov, 25-year-old Russian, almost the entire time provoked the opponents in the match of the first round at World League Final 6. At the end of the fourth set Spiridonov earned a red card for that, which resulted that Russia lost that part of the game.

“Number nine in the team of Russia is crazy, mentally ill. He was provoking my players almost all the time, and the referees let him do that, “ complained after the match the Brazilian coach Bernardo Rezende, “Spiridonov  was not the only problem, but also the referee, who punished him with the red card too late. If he previously got a red card, and continued to tease, he would be excluded. Other players deserve respect, but this guy acted totally out of control. He really needs a treatment, he is not an ordinary man.”

Spiridonov was suspended in 2011 by the Russian Volleyball Federation, because he had alcohol problems and now after two years he has returned to the “Zbornaya” team.