WCHY W: Brazil through to semifinals with Japan victory

World No. 2 Brazil beat Asian giants Japan ranked ninth with a well worked victory 3-0 (25-23, 25-22, 25-22) in the quarterfinal match of the FIVB Girls' U18 World Championship at Chatchi Hall in Nakhon Ratchasima. 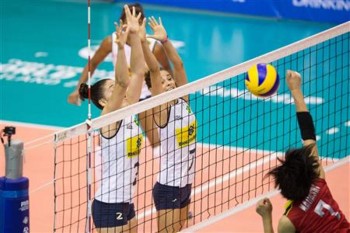 Brazil blockers were the decisive power to win Japan

As usual Brazil provide a new star every match, and this time it was the center Laiza Ferreira who made a marvelous blocking performance gaining 6 points from killing blocks out of her tally of 13 points. She prevented the Japanese to use their dominance in attacks through the center of the net.

Strong opposite Lorenne Geraldo did also a good job in sending her sharp hits from position 2 beside her blocking role as she won 3 blocks out of e her tally of 10 points.  Japan’s captain and opposite Miku Benoki was her team and match scorer with 14 points.

To read more news from this competition, click on Youth World Championship 2013 W.

TUR M: Kılıç – “Fenerbahçe jersey is not destined to anyone”