Brazil defeated Argentina 3-0 (25-22, 25-19, 25-21)at the Pan American Cup in Mexico, with another solid performance by Renan Zanatta who scored 14 points. Ricardo Lucarelli Sousa finished with 12 and Mauricio Borges with 11, also for Brazil, while Agustín Ramonda was Argentina’s best scorer with 11 points. 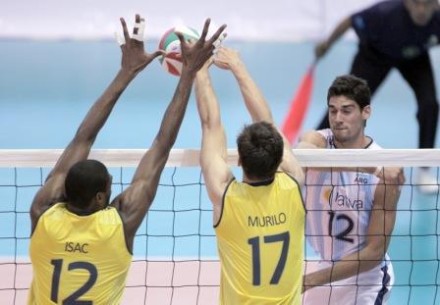 The classical South American battle defined the first place of Pool A at VIII Men’s Pan American Volleyball Cup in front of a good attendance at the “Juan de la Barrera” Olympic Gym on day three.

“It was an important victory and we hope the cup can help the younger players to increase their experience along with the veterans,” said Leonaldo Roberley, coach of Brazil.

For Alejandro Grossi, coach of Argentina, the attack of Brazil made a huge difference. “I think we blocked and served well,” he said. “We played well for many moments, but when there is a very important difference on the attack, there is nothing to do”.

Juan Ignacio Finoli, captain of Argentina said: “It was a tough match. We are trying to prepare for the U23 World Championship and faced a very solid team. We had some good moments, but sometimes there are some mistakes that cost you the result of the match”.

The Brazilian captain Mauricio Borges stated: “It was a good match. We set the conditions for a good game on our side. They served well but we went out to block and make the points.”