Fernanda Garay commented on her expectations for the World Grand Champions Cup and recalled the Brazilian team with fond memories. 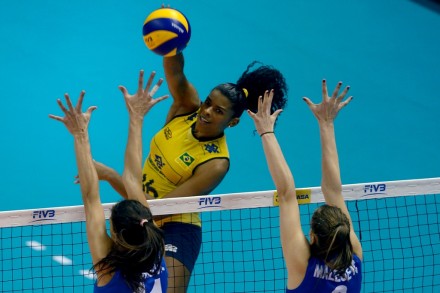 “We want to perform well. The athletes that have arrived are highly motivated and want to make everyone proud. Even with very little preparation time we want this team to perform well in order for us to win another title. We know that a championship is short and quick and with only five games we need to get this win” said the striker.

“I received a message from a former teammate here in Japan that read, “Welcome home”. I really feel at home here. Even without speaking any Japanese. It is also the second time we are doing acclimatization at CT Hisamitsu,” said Fernanda Garay.

The Olympic champion also stressed the importance of the acclimation period in the battle for another title.

“I am very fond of Japan. The Japanese have a very different culture from ours. The time zone and acclimation is always a challenge. This time, we are responding well and we are prepared,” she said.

When asked about her most memorable memories of the time she lived in Japan, Garay did not hide her admiration for the country.

“Japan is a country with a very interesting culture. I was surprised with each new experience. For example, the respect they have for older people is sensational. The Japanese also do not dump rubbish in the street. They learn to separate their own waste at home. Public transport also works very well,” said Fernanda Garay.

Brazil will compete against the United States, Thailand, Dominican Republic, Russia and Japan. The Brazilians hold the 2005 title in the competition and won the silver medal in the last edition in 2009.

SUI W: “I believe in winning spirit of my players” – said Baltić