BRA M: Final round of the qualifying phase defines pairs in play-off

Apart from Sada Cruizeiro (MG) that is on the first place, the pairs of quarterfinals will be determined in final round of qualifying phase of Super League 11/12. 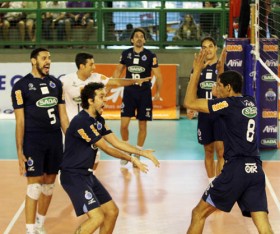 The leader of the scoreboard come into court against SESI – SP. The showdown will be in the hall of Vila Leopoldina, São Paulo (SP).

Sao Paulo team occupies the third place, and at home, hopes to be able to take the second position on the scoreboard and earn one more victory for the next phase.

Sandro, the setter of Sesi – SP, confirms the expectation. “A victory is not good just for classification, but also for the motivation for the playoff. We count on Wallace in this match, which will be a great boost for us. “

The last match of the opposite Wallace Martin was in the fourth round, on February 7, when the player injured his knee. After just over a month without playing, Wallace says that he is ready to help the team.

“Of course I believe that I will miss the pace of play. Staying out is bad. I took this as a rest  to get in better physical form. “

One of the main highlights of Sada Cruzeiro, the opposite Wallace Souza, is the third best scorer and the third best spiker in the League, ensures that the fact of having secured the first position should not be taken for granted.

“Of course it is too good to have the first position guaranteed. Now we wait for the playoff, but we can not underestimate their playing in this game. We have to get serious and stay focused.“

The best setter, acording to statistics, William Arjona, that suffered the back injury is still doubtful whether he will play in the match. “I will go with the team, but still I do not know whether I will play in this game. I am looking forward to playing in playoff.”

The teams eight that qualified for the quarterfinals are already defined.