BRA M: Marcelinho best setter and player of round 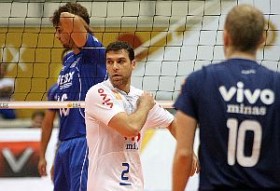 The team from Belo Horizonte (MG) eliminated Cimed / SKY in the third game of the series. The highlights of Vivo / Minas were the center Octavius, as the best player in the block and the opposite Filip, who was the best in the attack.

In another series, Sada Cruizeiro eliminated BMG / Sao Bernardo (SP).  The opposite Wallace was the highlight of the match with 30 points. Mauritius was the most efficient in reception and Sergio was the best libero. The opposite Renan was the best player in the service.

Marcelinho (Vivo / Minas) – The best setter, the third in the service and defense

BUL M: National team of Stoytchev for tournament in Sofia