WCH M: Fonteles – “Poland has a special place in my heart”

Felipe Fonteles modestly represented his team to the press conference after Brazil defeated Russia in straight sets to qualify to the semifinals of the FIVB Volleyball Men’s World Championship at the Atlas Arena on Wednesday. 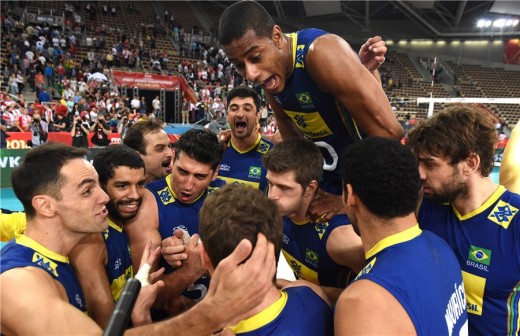 “I volunteered to come to the conference, because I have a lot of respect for the Polish people. There were some sparks between Poland and our team at the court yesterday, but it’s normal in such a hard game. However, we want to apologise to the supporters for what happened at the end of the match. We didn’t want to be disrespectful towards them, but we simply wanted to demonstrate that we don’t agree with steps made after the end of the second round. The case is closed now. It doesn’t matter anymore.

“I know that today it is a very important historical anniversary for Poland and I would like to dedicate this victory to the Poles.

“Honestly, Poland has a special place in my heart, but also rationally, they are playing their best volleyball in last two years and for sure are capable of winning tomorrow’s match with Russia. They only have one more step to do, but volleyball is unpredictable, anything can happen. I wish we could play against them in the final; it would be a beautiful show. Good luck to Poland and see you in Katowice.

“To be honest, I didn’t know that Murilo would be able to play today, he still felt some pain in the morning. Right before the game the coach decided that Murilo will start the game, but warned me to be ready to step in at any moment. We didn’t want to overburden his leg because he still needs to rest. Wallace is in good shape, he still hasn’t fully recovered but he’s getting better. They are both very important for the team, which was clearly visible today.”

WCH BETTING TIPS: All or nothing