The host of the TV Show “On the Road with Galvão” made an interview with the head coach of Brazilian national team Ze Roberto. He picked up Ze with a truck and then they continued their conversation on his ranch, where famous coach showed his skills with horse. 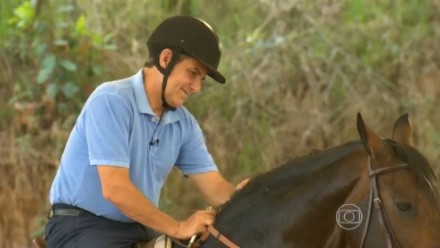 About the third place at the last World Championship Ze said:

“In Brazil, it’s the same thing if you take the second or the last place” explained Ze Roberto because people always expected the gold medal.

The ranch is called “Rancho Du Zé” where the famous coach spends a lot of time with wife and his grandson Felipe.

In this interview he also said that he dreamed to become a football player but life took him to volleyball:

The Brazilian journalist asked Ze who were the best players of the National team:

“I know that no one will get mad at me because I think everyone agrees that Marcelo Negrão and Ana Moser were the best” said Ze Roberto.