The man suspected of committing a racial slur against Sesi-SP’s player Fabiana defended from the charges and said he hasn’t called her a monkey. 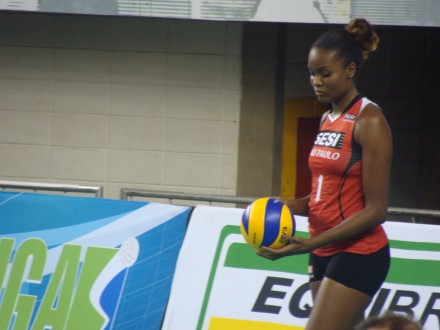 However, he admitted that he shouted from the crowd “You play for the Indian, African” in the match between Fabiana’s team and Camponesa/Minas Tênis Clube, in the Super League, last Tuesday.

“The only thing I really claim that I said loudly, was this: ‘You play for the Indian, African’… But I didn’t call her a monkey or threw banana at her. That never happened”, said the suspect identified as Jefferson Gonçalves de Almeida to “TV Globo”.

The 43-years-old doorman was removed from the gymnasium and taken to the police station. Four other fans gave evidence and were released by the civil police. According to the delegates, Fabiana hasn’t yet given a formal complaint about the incident.

The case came to light with Fabiana’s outburst on social networks. The day after the game, Sesi-SP’s middle blocker wrote that a man in the crowd “fired a machine gun of insults” and called her a “monkey” several times and “was taken from the gymnasium and sent to the police station in Belo Horizonte”.

Fabiana also wrote about racism which “puts under discussion the world we live in and want for our children.”

She gained support from all significant female and many male players in Brazil and beyond the borders of that country.

KOR W: Hooker got successor – Kim had 35 in IBK’s win over leader

Spectacular. She is a girl, for god sake! Why did you have to shout at her?