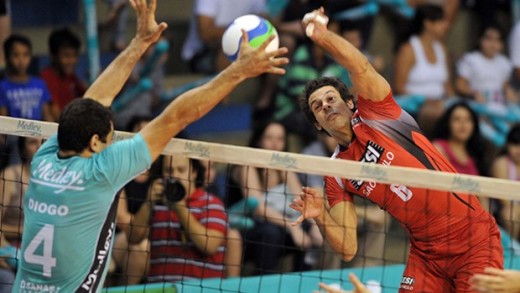 During the passing from the third to the fourth set, some members of the Campinas technical staff, fitness trainer Jaime Antonio Lanzinni and physiotherapist Marcelo Duval Guidotti, started a discussion with Sesi players Cleber, Lorena, and Leozão. The fight started with mutual pushing, which led to Lorena shouting and swearing.

After a few moments of confusion, members of two members stormed to the court to break up the fight. Arbitration decided to disqualify Lorena and Leozão. It all finished with thrown bottle towards the members of the technical committee, who dodged and were not hit.

The fight didn’t escalate because there was a net separating the the two sides.

In this times of trouble, the Medley/Campinas was leading the match by 2 sets to 1. Even without two athletes, Sesi managed to win the fourth set and forced a tie-break. Then the crowd’s support made a difference, and the hosts, Medley/Campinas, won by 3 sets to 2.