Tillie – „We hoped we wouldn’t have to use Ngapeth so early in the competition“; Vermeulen – „Spectacular game“

The French Men’s National Team nearly failed in the second test in a row in the 2017 CEV Volleyball European Championship. 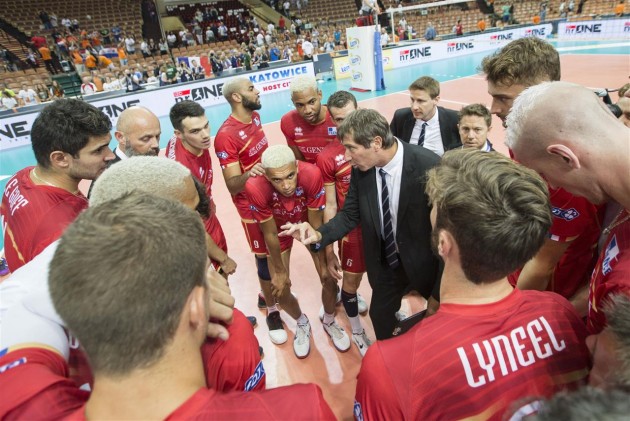 If head coach Laurent Tillie did not send Earvin Ngapeth, who is still struggling with the injury, on the court in the fourth set against The Netherlands, France would likely suffer another defeat in the EuroVolley and be on the verge of being eliminated from the tournament in which they defend the trophy.

„Truth be told, we don’t play well at the moment. We are fighting against injuries, tiredness, stress and we want to play too good for our current abilities. We are battling everywhere, in all elements on the court – setting, spiking, blocking, serving… Today’s goal was just about survival and tomorrow’s goal will be the same. We are accepting right now that we are not playing well and we will have to find a solution while trying to survive in this competition. We hoped we wouldn’t have to use Earvin Ngapeth so early in the competition because he is not in a good physical shape. He did two good training sessions in the past couple of days and it was either to use him today or never because if we had lost this game, we would be out of the race. We had to take that risk, so thank you Earvin Ngapeth,“ Tillie was honest.

„I think that the game was spectacular for the viewers. We didn’t start well, but in the end, we played very well. We had two match points so we had victory in our hands. But unfortunately, we didn’t use these chances. I didn’t see any weak points in the game. I just saw two teams fighting until the very end. It was only a matter of good or bad luck,” Gido Vermeulen, The Dutch NT head coach, stated.