As they host Czech Jihostroj CESKE BUDEJOVICE this coming Wednesday, France’s PARIS Volley will have the opportunity to cement their second place in the current standings of preliminary Pool C of the 2014 CEV DenizBank Volleyball Champions League – Men. 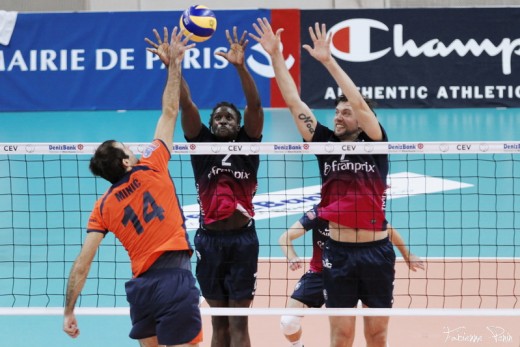 Jihostroj CESKE BUDEJOVICE – after four consecutive setbacks – is already eliminated from the competition but the Serbian-born opposite of PARIS Volley, Goran Marić, does not underestimate the Czech opponent.

“We have to be well focused right from the start of the game if we want to avoid a surprise” he says.

Though they still have to claim their first points in the competition, Jihostroj are currently ranked second in the Czech Extraleague and recently swept three matches in a row there anchored by their major star Michal Krisko. PARIS Volley, on the other hand, have claimed six straight wins by combining European Cups and national league and have only lost one game at home this year, namely the season opener with Poland’s Asseco Resovia RZESZOW.

The only bad news for Paris is related to the ankle injury suffered by William Bersani who will probably be missing the clash with the Czechs. PARIS Volley edged Jihostroj 3:1 in the second round of the prelims where the two teams crossed their ways in the Czech Republic.

A large audience is expected to get together on Wednesday night at the Charlety arena, including some Czech fans traveling from Ceske Budejovice.

EEVZA Youth Boys’ Championship about to start in Estonia