The important victory for VfB Friedrichshafen in national League: With the result of 3:2 (25:23, 21:25, 23:25, 25:23, 15:12) after the game of 132 minutes, the players of Friedrichshafen defeated Berlin Recycling Volleys, the third team on the scoreboard, thus securing the second position. Diagonal attacker Oliver suffered a serious foot injury. He was substituted by Leonardo dos Santos, who celebrated a successful debut. 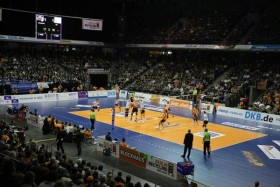 Immediately, after the match point, Nikola Rosic held the ball once more.

While his teammates were raging across the whole court and cheering and holding him in their arms, the libero of VfB Friedrichshafen was a little excluded.

He looked around briefly, and then crossed himself with his right hand.

Rosic looked exhausted and happy at the same time – because this game between Friedrichshafen and Berlin Recycling Volleys was once again not for the faint of heart.

Thus, the players of Friedrichshafen secured the second place in the volleyball league.

With four points ahead of the third team of Berlin, the players of Friedrichshafen in the two outstanding games in a regular round against Moerser SC (February 15) and CV Mitteldeutschland (25 February) can even afford a defeat.