Maaseik, Belgium, February 27, 2012. The mentor of Noliko MAASEIK, Vital Heynen, recently signed a contract with the German Volleyball Federation (DVV) whereby he will be at the helm of the men’s national team for the next three years. 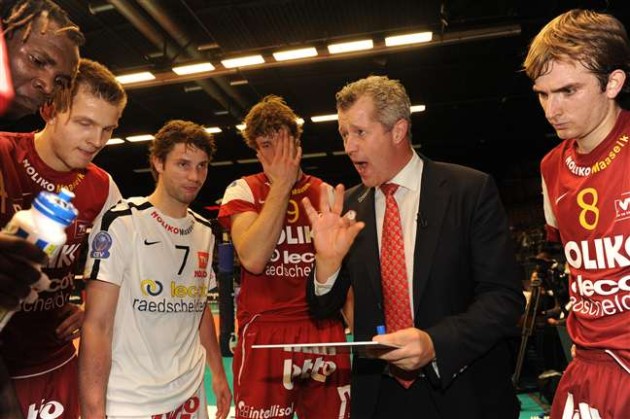 The 42-year old former setter is hence the follower of Argentinean Raul Lozano who was dismissed as a result of a very disappointing campaign at the European Championship held this past September in Austria and the Czech Republic.

Heynen will be working for the DVV from May to September and hence shall remain also the head coach of Belgium’s multiple national champions Noliko MAASEIK.

Germany’s national team is still hoping to make it to the 2012 Olympics in London and will be joining the European Qualification Tournament scheduled for May 8-13 in Sofia and, if not coming out on top there, eventually try to book that much wanted pass via the last stage of the Olympic qualification process, i.e. a home intercontinental round slated for early June in Berlin.

Heynen will be guiding that group also in the 2012 FIVB World League with Germany having been assigned to a preliminary group that includes also Argentina, Portugal and Bulgaria.

He will be assisted by two former stars of Germany’s Volleyball, Stefan Hübner – who recently announced his retirement from competitive sport – and Ralph Bergmann, quite curiously an ex player of Noliko MAASEIK.

Heynen will be joined also by physical trainer Fons Vranken with whom he has been working in Maaseik to take care of some top players like Jochen Schöps, György Grozer and Simon Tischer.

“I am very grateful to the club of Noliko for the support they have given to me as I take up this unique challenge” says Heynen who will also continue mentoring Belgium’s top pair in Beach Volleyball, Liesbeth Mouha/Katrin Gielen.

CUB: The Hall in Havana is still under construction