CL M: BR Volleys’ coach about F4 – “Other teams think we are the weakest”

The European success of Berlin Recycling Volleys, this year’s host of Champions League Final Four, started in the season 2012/2013. Of course, BR Volleys’ participation in F4 in 2015 will be the highlight of the more recent club’s history. 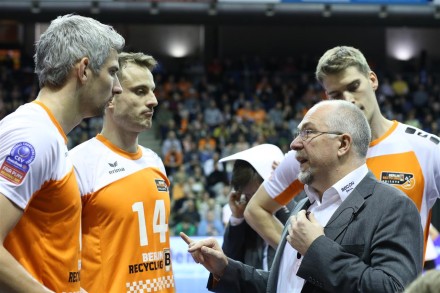 In the already mentioned 2012/2013 season, BR Volleys entered after seven years and in the first Champions League game after return, in October 2012, there was a 3-0 victory against the Czech team České Budějovice. It was the starting point of a successful Champions League comeback.

However, the success against the Czech champion was one of many. Since 2012 the team from Germany’s capital has won several clashes against favorites – Novosibirsk, Trentino, Resovia…

Not only with the results on the court, but also with the organization and their media work, BR Volleys gained respect and appreciation in Europe and thus, came 2015 Final Four. To host it, BR Volleys had to reach the Playoffs – as they did, finishing the first round as second ranked team in their group.

How does Berlin team manage to keep up with the best teams of the continent while having a comparatively small budget?

“Firstly, we know that our fans are a massive support for us. Secondly – the experience. Indeed, we don’t have any absolute world star. But we have players with a lot of routine who have already played big matches. We are confident because of our organization, team spirit and know-how. Thirdly, the players are highly motivated when they compete in Champions League matches. We are able to top ourselves in those games. It is not comparable with everyday games because it is charged with relevance,” BR Volleys’ coach Mark Lebedew mentioned three reasons for the team’s success.

He does not care about the opponent in the semi-final: “All of them are not only top teams, but also in peak form. The other teams think we are the least and we want to take advantage of that situation – no matter who will be the opponent.”

FRA M: Are they the best duo of middle blockers in Europe? (VIDEO)