GER: von Moltke quits after 15 years at the helm of German Volleyball family

As Werner von Moltke had announced the intention not to complete his term which was due to end in 2013, since some weeks the DVV – German Volleyball Federation had established a special committee responsible for looking for a suitable candidate for succession. The members of that body unanimously proposed Mr. Thomas Krohne as they got together this past June 16 in Miesbach; after spending the last 15 years as chairman of the DVV, Werner von Moltke will quit the position right after the 2012 Olympics while Mr. Krohne will be officially sworn in via a special DVV meeting that is scheduled for next August 25 in Timmendorfer Strand in combination with the final stage of the Beach Volleyball national championship. 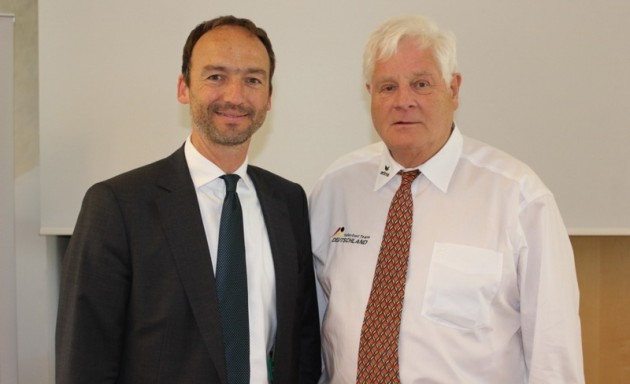 Krohne, 50 years of age, is the CEO of the sportsman media group, a sports rights and marketing agency based in Munich, whose subsidiary LAOLA1.tv is well known among Volleyball and Beach Volleyball fans having provided live streaming of all major international competitions in the past few years. Krohne has a strong and special connection with Volleyball, having been a player, coach and referee for many years. Prior to the establishment of the sportsman media group, Krohne spent a few years as TV Director for ISPR, another sports rights agency, being responsible there for the international marketing of the media rights associated to the German soccer Bundesliga, and worked as a full-time employee for the German Golf Federation as marketing manager.
“The DVV presidency is an enormous challenge for me especially as I would like to contribute to the development and modernization of Volleyball in Germany. I deserve much respect to Werner von Moltke and his achievements in the past 15 years. My first goals are to guarantee financial stability to the federation as well as to fully exploit the opportunities disclosed by the new media” says Krohne.

As he is about to leave after such a long time, von Moltke stresses: “I always said that I was going to quit as soon as someone was found to take up this challenge. I think it is the right time, after the Olympics, to go and move on, especially as we need to immediately start the preparations for the next Olympic quadrennial. I am still committed to the sport, because I love it, I love the athletes and I did everything with much pleasure. As I am about to quit, I think my legacy is a well-organized institution”.
Werner von Moltke was elected DVV President back in 1997 and his term has been the longest in history for the body governing Volleyball and Beach Volleyball there in Germany. Some major international events – e.g. the women’s World Championship in 2002 and the Beach Volleyball World Champs in 2005 – were held on German soil under his leadership.
A special ceremony will take place this coming August 25 to bid farewell to von Moltke right upon the official endorsement of Mr. Krohne’s presidential election.

CEV: Referee Delegates get together to work on education and evaluation procedures