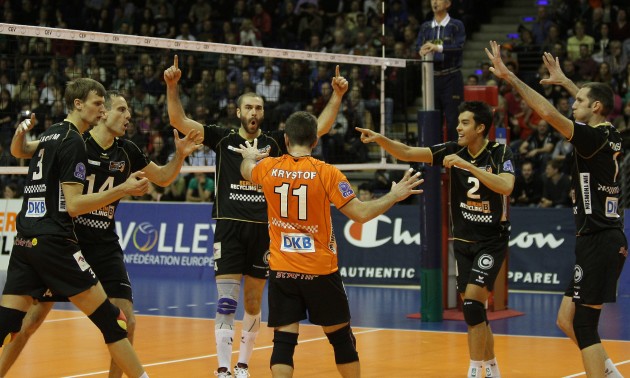 It all started well for the champions. The calendar was scheduled in a perfect way for the guys of head coach Mark Lebedew and allowed them to properly divide their time between the CEV Champions League and the domestic games. Unlike their arch rivals Generali Unterhaching and VfB Friedrichshafen, Berlin Recycling Volleys had less experience playing two, sometimes even three, important games per week, so the main challenge would have been to redistribute physical and psychological strengths accrodingly. This is where the schedule came to help – the title holders started the 2012-2013 Bundesliga with two consecutive derby games in a row versus Friedrichshafen at home and away in Munich. Having clinched two wins in a week, Berlin RV were pumped up emotionally to make a successful Champions League group endeavour. The sequence of matches against theoretically easier opponents in Germany allowed them to rotate the squad and provide the necessary amount of rest when needed – vital when you have to travel to Asia, Novosirbisk to be more precise, and play a European Champions League game there in the middle of the week.

The Management Board members of Berlin RV are certainly satisfied with the good start of the season. Plus, they hit the jackpot recruiting the German international Robert Kromm who acts as the main scorer quite often, especially when Lebedew keeps rotating his opposites Spirovski and Carroll. We will witness eventually whether the Australian will get back to his usual shape and overtake Spirovski‘s starting position this season.

As the team had been juggling three balls simultaneously, they had to sacrifice their German Cup (Pokal) participation quite early. The draw sent them in Unterhaching already in the last 16 round. The 3-2 win against the same opponent in the Munich Olympic Sports Hall could not be repeated in the small sports center in Unterhaching and the champions were left to focus on whatever they had in their basket.