PAOK made the big surprise of the round by beating the previous year champion’s team. Pamvohaikos grab the chance and climbed in the second place. 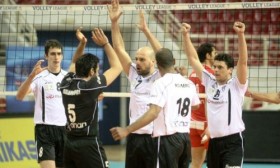 Thessaloniki’s teams succeed to take the three points during the 14th round. The bid surprise took place in Pylaia where the home team of PAOK was very effective and finally won 3-1 (25-18, 25-19, 16-25). For PAOK Apostolos Armenakis scored 12, Kostas Girtzikis 9 and Ivan Borovnjan 14 points. Olympiakos had to play without his basic setter Dima Filippov and the lidero Pavlos Kouzounis. Aris Thessaloniki’s also managed win 3-0 (26-24, 25-17, 25-17) against Panathinaikos. This is a very valuable win for Aris because both of the teams are trying to grab the necessary points to continue play in the first division of volleyball league for the next year. Kiriakidis and Tzelati scored 18 points each for Aris team.

GRE M: Panathinaikos in play out