GRE M: Kooistra – “It has started with Jimenez…”

One of the witnesses of the shameful scenes on the Greek volleyball derby was Wytze Kooistra, player of Olympiacos. 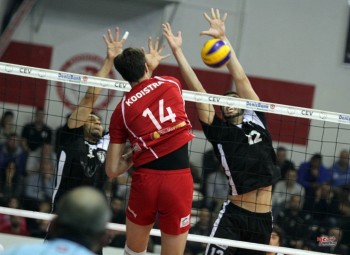 He gave an exclusive statement for volleybalkrant.nl after the match, in which he described the whole incident.

“It started with some odd behavior of one the players of PAOK (Javier Jimenez) at the end of the second set. He scored a point and celebrated it on a quite unusual way. He started screaming to the pole of the net! It looked funny and sad at the same time. When we lost the second set by the narrow margin, a shower of water bottles was thrown toward the opponent; our audience freaked out. I think the game has been stopped for half an hour.”

The speaker and the police had to calm down the audience. But after the 25-27 for PAOK in the fifth set, fans went wild again.

“It escalated again and the police had to protect PAOK players. Outside the gym, it appeared like a huge battle has taken place. There were stones everywhere” concluded Kooistra.

GRE M: PAOK players welcomed as heroes back in Thessaloniki