Arrighetti creates webpage to raise funds for victims of flooding

Bergamo, Italy, November 29, 2011. As she was participating in the FIVB World Cup in Japan – eventually claiming the trophy with Italy’s national team – middle blocker Valentina Arrighetti did already address a moving message to the many people that were severely affected by the flooding that hit her hometown Genoa. 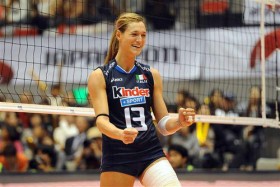 Arrighetti is currently busy in lobbying for the organization of the so-called “All Star Game” in Genoa but at the same time her active involvement has turned into a webpage, www.piske13forgenova.it, whereby she intends to raise funds for her hometown.

“As I was in Japan I saw on TV what was going on there and I wished I was there to help. Back to Italy my intention remains to help my hometown and therefore I have just opened a website to collect money for all those that were affected by the flooding. We are still trying to bring the All Star Game to Genoa and lobbying for this, but in the meantime we are about to start with some more actions. There will be an auction with all jerseys of the players that won the World Cup in Japan plus some more gadgets donated by myself and other players that I already have to thank for their support and sensitivity. By donating a very small amount of money the fans will be also able to get some pictures autographed by me and all the money we raise will be donated to the city of Genoa” states Arrighetti.

Ball calls for US changes

WHAT WAS THAT??? Luciano de Cecco’s crazy...