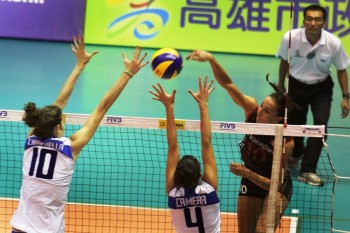 Sunday’s match was a do-or-die for each team, who needed the win to move onto the finals. Italy, who finished 10th in last year’s World Grand Prix, has secured a spot in the top six teams qualified for the Finals in Sapporo, Japan from August 28 to September 1.

Italy also keeps a perfect World Grand Prix record against last year’s bronze medal winners, Turkey, with two wins in two games. Turkey is the only European team that Italy has met more than once and never lost to; in 2008 Italy defeated their opponents in the World Grand Prix the preliminary round 3-1.

Italy’s Valentina Diouf was the top scorer for her team, with 22 points, while Turkey’s captain Neslihan Darnel lead her team with 17 points.

The give Italy 21 points in the World Grand Prix rankings, while Turkey drops to 19.