Italy: Modena: Bagnoli about Kooy “It was better to sell him” … Esko hardly?

MODENA - During television broadcast Barba & Capelli, a weekly broadcast on Teleradiocittà, conducted by Paolo Reggianin, Daniele Bagnoli analyzed the time of his Casa Modena twice directly commenting on the situations related to Dick Kooy and the setter Mikko Esko. 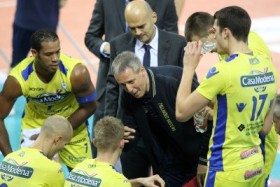 Bagnoli explained his decision by starting “an incident that occurred in training a few days ago. Usually, if someone is not concentrated in the hall, training stops and the whole group help him give his best. However, last time a real clash happened between Kooy and the rest of the team. “

With hindsight – said Bagnoli – “A player of such talent would do well to sell it in Kazan or Sisley or many other teams that wanted him in the summer. A player, who never accepts the decision to be replaced, even when it is clearly deserved, cannot be the part of an ambitious team like ours. “

OFFICIAL: Another American in Conegliano