All eyes will be on that sunday afternoon match in PalaTrentno between Trentino and Piacenza, it's a classic it will be amazing for sure. Both teams are in great shape in Serie A as well as in Champions League, so expect some great plays. 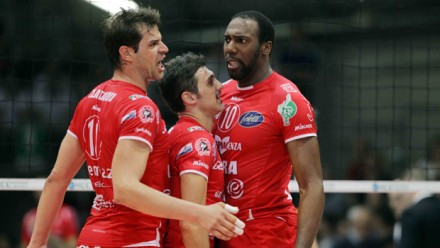 Second consecutive home game for Vibo following the tie-break victory over the Italian champions last week, which send them in 8th place, the last qualifying position for the Italian Cup. Città di Castello is 10th but just one point behind. In the last round, it was defeated by Cuneo.

Macerata has already secured its ticket into the Italian Cup and into the next phase of the Champions League. And now they will face Cuneo in the 73rd meeting between the two clubs, a classic in the league. Cuneo is far from playing at the level of Macerata this year. They have been knocked out of the Cev Cup this week, and will try to add to the recent victories to improve their seventh position to make sure they get into the cup.

Three victories with maximum points over Molfetta, Vibo and Ravenna rocketed Perugia to a very exciting position in the table, fourth. Latina have had ups and downs: unbeatable in Europe (win in Challenge cup 16th of finals this week) but struggling in the league. But given the tight table, they still have hopes to qualify for the cup quarters.

One of the most awaited games of the season. Last year, it produced five breathtaking games in a playoff series and now they’re ready to give more emotional moments to their respective fans. Both perfect in Europe, Trentino is three points behind following its tie-break loss against Vibo.

Both Molfetta and Ravenna still have a chance to make it into the cup. Molfetta is in a better position, 9th, but level on points with Vibo, 8th. This will be the first of two consecutive home games.  The first is against Ravenna, four points away from the cup zone despite five defeats in a row.

Intriguing match-up between two teams tied with 12 points and trying to consolidate their league position to qualify for the Italian cup. Modena took four points out of back-to-back road games against Macerata and Latina, while Verona lost its last two against Piacenza and Trento.

Italy: In the Italian Serie A1 another...