The champion, the friend, Vigor Bovolenta has left us last night, while doing what he liked, playing volleyball in his new role as the veteran in B2. 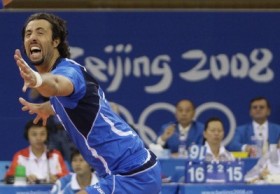 The player and the manager who had begun to take its first steps in marketing of the team Forli, passed away after feeling bad during the third set on the court of Macerata, where he was playing with his Volley Forli against the team of B2 Lube.

The former vice-champion of Olympic games in Atlanta 1996, got sick during the game and asked to be substituted, but then he collapsed on the sideline.

After a long reanimation on the court, Vigor was transported to the hospital, where he died.

Belonging to the class of 1974, married to the former setter Federica Lisi, with two Olympic participations, left a void in all those who knew him, as a colleague, an opponent and as a friend.

“We’ll miss you dear Vigor, we will miss your genuineness.”