Soon after the conclusion of the season, with the epilogue of the V-Day that was won by Macerata against Trentino, it was announced that Silvano Prandi will continue leading Andreoli Latina in the new season from 2012-13. The agreement was confirmed by the president Gianrio Falivene assisted by the sports director Candido Grande and the team manager Bartolomeo Cappa. 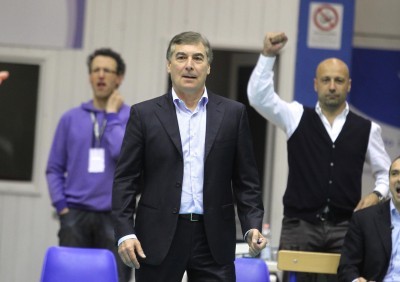 Gianrio Falivene: “Although the the season has ended, we have already started planning the next one. We expect an important season for the history of the club concerning for the first time the European Cup. We need the person to carry out this  project, so we have made the agreement for the next year with the coach Silvano Prandi, who he will continue leading Latina. We have in mind the objectives of the market and we wait for the confirmation of the budget for the next season from the politicians. It is time to make some changes, since the structure has been established.”

The coach Silvano Prandi: “I think there are more than last year’s conditions to work well. I am only concerned with my duty. This is the club that is open to innovation and willing to do things right. We hope to reproduce what we have done this year. Although we had a very well season, let us not delude ourselves that we can start from the semifinal of the championship. We must start from zero in order to renew the spirit for this year. However, that does not depend only on us, our will is just the starting point. I think that in this period Latina is a desirable market for players, but I do not have the elements to confirm it. Also this year we will try to find young talents rather than take the mediocre players. I do not think that there are players who win a game alone, I believe that volleyball, like all team sports, has to be strong without any weak players. Tailli has much chance to improve. At the beginning of the season I thought that he might be better as a hitter, but he proved himself better as a libero.”

The sports director Candido Grande: “We say that this year we are not starting from the beginning. We signed the contract with two opposites Jarosz and Troy, the hitter Fragkos and the libero Tailli. We will continue to make choices about the “young”, although we also need some element of experience and we hope to confirm some of the present players. In the following days we will determine the date for the preparation that will be in August.”

ARG M: Part of the Argentine seniors men team arrived to USA and is training hard for the friendly matches v the Olympic champ

He is so unpredictable – Micah Christenson...