ARG M: Part of the Argentine seniors men team arrived to USA and is training hard for the friendly matches v the Olympic champ

The Argentine Seniors' Men Team goes on preparing for a very demanding international season that will start beginning of May with the South American Olympic Qualification Championship to be held in Argentina at Almirante Brown venue, followed by the most important annual world competition, the FIVB World League that starts on the same month. Part of the team, coached by Javier Weber already landed in the USA and started immediately training for the friendly matches that will take place Friday, April 27th and Sunday, April 29th in Anaheim against the host Olympic Champion. 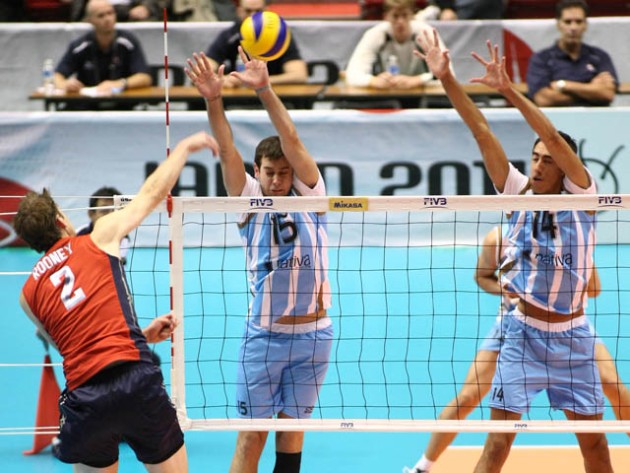 Argentina arrived to Los Angeles this Tuesday and moved to Anaheim to start training without any delay for the matches that will face it against great experience players like Clayton Stanley, Riley Salmon and Richard Lambourne, leading the Olympic Champion USA team.

The matches will be held at JSerra Gym in San Juan Capistrano in California where about 2,000 fans will be able to watch the matches.

Prior to the trip of the light blue – white jersey team USA’s coach Alan Knipe assessed Argentine’s team by expressing: “These matches are very important because they will be played against a very strong rival“. “The support of our people will be very important” read many USA websites.

Also the local Media these days pointed out the importance of Argentine Seniors’ visit as they are ranked 8th by the FIVB in the world. “Just two places behind USA” they expressed inviting local fans to see “a competition at the best world level“.

Both countries then will host their Olympic Qualification Championships with Argentina playing against Venezuela, Colombia and Chile; May 11th – 13th in Almirante Brown while USA will host NORCECA’s competition in Long Beach, May 7th – 12th playing against Cuba (that is playing the other part of Argentine seniors in our country this week) among others, in a very strong competition.

This same formula was used by Argentina and USA on the previous Olympic Qualification championship in Japan in the year 2008 when they also played friendly matches in USA.

Agamez for WoV – “Season is probably...