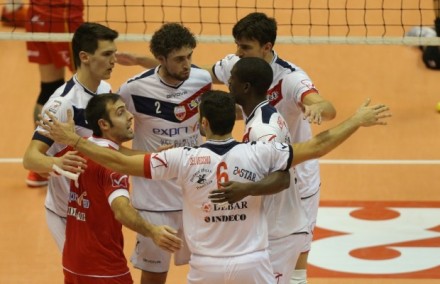 Definitely, Modena is in a little crisis. After losing to Energy T.I. Diatec Trentino in the last round, the team that holds the first place in the standings survived a thriller in the 12th round.

Modena had the unstoppable duo – Earvin Ngapeth (22) and Nemanja Petrić (21).

Taylor Sander with 21 and Mitja Gašparini with 17 were the most efficient in Verona.

Exprivia Neldiritto Molfetta caused a huge upset by defeating Cucine Lube Banca Marche Treia with 3-2 and now is only 3 points away from the play-offs. The victory over the current champion of Italy is considered as historical in the local media.

Almost every set was filled with drama – especially the first – 39-37 for Lube!

In Lube, who suffered its second defeat in a row, Simone Parodi collected 21 point and Bartosz Kurek 18.