OG M: Papi: his fourth medal is for his friend Vigor

Italy Samuele Papi is the only player here in London, together with Russia Sergey Tetyukhin, having four Olympic medals around his neck: two silver in 1996 and 2004, a bronze in 2000 which has been doubled now in London. 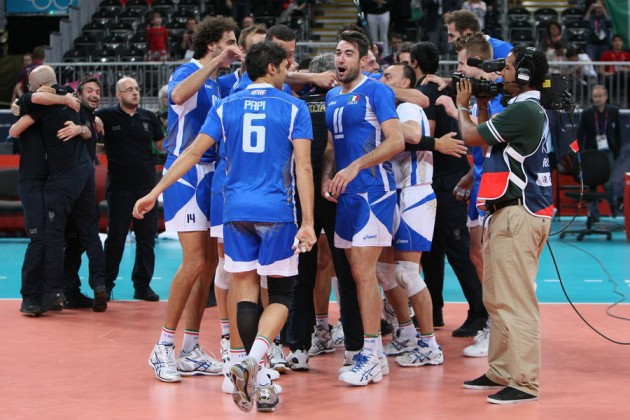 “I’m happy for this, really. This was an outstanding medal, it wasn’t easy. I have to thank all my teammates, starting from captain “Sava” Savani. We wanted this bronze so fondly. And we want to dedicate it to our friend Vigor Bovolenta, he has been always with us.”

Vigor was the middle blocker who tragically passed away on March 24 this year, while he was playing a match in the B2 championship, the Italian fourth division. He was part of the Azzurri team for many years. His shirt was displayed on the podium by the Italians.

Together with his friend “Bovo” Bovolenta, who cracked his nose training in Atlanta and played the final with a protective mask, Papi played outstandingly in 1996. And before it, being one of the heroes of World Championship’s gold in 1994. He was like Peter Pan, a 190-centimetre wing spiker who was able to fly over the highest blocks. His tale has been an example for generations of players in Italy.

He surprised every single fan when he played an amazing club championship in Piacenza this year. Everyone apart from coach Berruto, who called him to join the group preparing London 2012.

“My expectations to be here where below zero, last summer. Then the mobile rang a few months ago. Mauro Berruto explained me what he wanted for me, which was my role in the roster. I knew I had to serve the team playing barely. I answered that for another Olympic games I would have done everything I was requested of. I never dreamed of another bronze, I got to thank my teammates.”

Asking him to find four different pictures of his four medals’ path, Samuele open his memories. “Atlanta recalls me every time the last rally. That’s undeletable. From Sydney, I think about the first set that we were not able to close against Yugoslavia. From Athens, a picture of the podium: that silver medal was a huge result for us because it was so difficult to arrive there, I remember a fantastic semifinal against Russia. I can’t take any pictures back from London, because I would like to take at home every single shot. Ah, I would like to take home even the alarm-clock: to play the bronze final it was set at 5.45 a.m.!”

So now it’s time to say farewell to his blue shirt. Sure that he’s leaving? “It’s official, you don’t need to stand me no more. Maybe we’ll see each other in a mixed zone with myself at your side as commentator. Or on this side in Rio as a beach volleyball player… No, I’m kidding, don’t take note…”.