In the battle for the provisional leadership in Pool C the four-time club world champions of TRENTINO Diatec edged tonight Zaksa KEDZIERZYN-KOZLE of Poland in straight sets (25-22, 25-22, and 25-22). Read latest volleyball news on Worldofvolley.com. 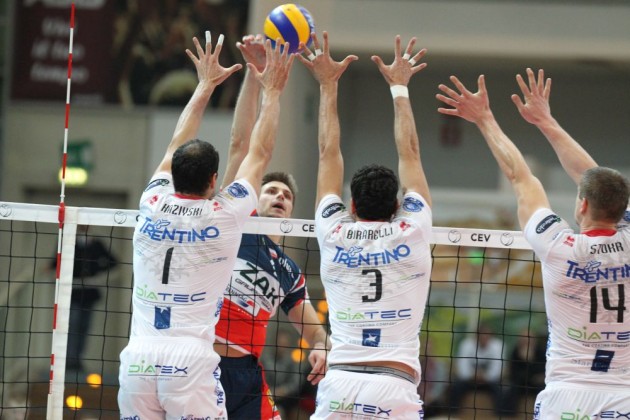 Via their third consecutive win the Italians keep a perfect record of 9 points after three matches having conceded no sets to their opponents.
For the most important match of the main phase head coach Radostin Stoytchev lined up the best starting six while Zaksa was missing its libero Piotr Gacek eventually replaced at the very last moment by Sergii Kapelus who – missing an ad-hoc jersey – eventually wore an orange bib.

Zaksa caught a good start especially via a very good performance in blocking while TRENTINO Diatec opened slowly. The first set was played point for point up to a tie at 20:20; after that through a better service and excellent attacks by Osmany Juantorena and Jan Stokr and thanks to a mistake from the serving area by Felipe Marques Fonteles, the opening set was sealed by the home team with the score of 25-22.

The same story unfolded in the second section of the game where both teams started out quite aggressively and with powerful actions in attack. In the end, the four time club world champions made the difference from the serving area as Zaksa players had huge problems in reception.

In set 3 Zaksa did not lose its determination. TRENTINO after a positive break (7:3) seemed to lose a bit of concentration and the Poles continued to chase TRENTINO up to a tie at 7 all. Although the Italians jumped away once again at 12:8 the guests were able to cut the margin once again (12:13). TRENTINO regained the lead after the second technical time-out (18:16) but once again the Poles got back on track (22-22). At the end of this exciting section, excellent service and powerful blocks led the hosts to claim the match.
The Czech opposite Jan Stokr was named MVP of the match with 54% of efficiency in attack (he chartered 19 points including 4 blocks and 1 ace). Noteworthy was also the performance of captain Matey Kaziyski (54% of efficiency). On the other side of the net was remarkable only the performance of opposite Antonin Rouzier with 54% of efficiency in attack and 21 points including 5 blocks.

“Our opponents were very strong, I have to say that we could play much better, we had problems in situations that we should know how to manage; anyway it is a good sign that we won even if we did not play at our best. Every time we get the victory thanks to the outstanding performance of a single player, tonight was Stokr’s night” stated local head coach Radostin Stoytchev.

“We made mistakes handling easy situations, TRENTINO served very well and we suffered a lot the lack of our libero Gacek, even if the young player Kapelus did his best. I am sure that next week it will be a completely different match, more balanced. We need to be patient and braver, when playing against teams like TRENTINO there is no time to have fear” stated Zaksa assistant coach and former international star Sebastian Swiderski.

CL W: VILLA CORTESE back on track after couple of setbacks

ITA W: Everyone wants Egonu in their...