CL W: VILLA CORTESE back on track after couple of setbacks

After losing a couple of weeks ago to Rabita BAKU, Italy’s AsystelCarnaghi VILLACORTESE got back on track on Wednesday by edged the Czech national champions of Agel PROSTEJOV 3:1. Read more about latest volleyball news, games reports, and statistics on WorldofVolley. 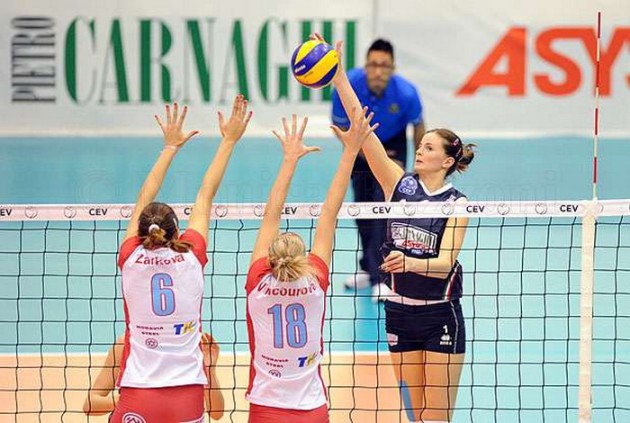 Puerto Rican Vilmarie Mojica impressed the audience as well as the Czech players by opening the match with an ace and two splendid spikes, a good start for the Italian side that recently suffered a setback in the national league. Even though VILLA CORTESE played without the still injured Caterina Bosetti, it was team captain Katarina Barun – best scorer in the end – that anchored the Italians in attack. Even though PROSTEJOV got close in the score, still VILLA CORTESE could sail to the final 25-23.

Agel PROSTEJOV fought back in the early phases of the second set (0:4) and Caprara decided to substitute Alexandra Rose Klineman with Sanja Malagurski. With the spikes killed by Barun and the blocks by Stefana Veljkovic VILLA CORTESE got back on track and the second half of the set was an Italian “monologue” with the home side cruising comfortably to the final 25-19.

PROSTEJOV stormed back in set three with head coach Miroslav Cada adding Solange Soares and Anna Velikiy to his starting six and with the Italians being not able to break away, the guests from the Czech Republic could go for a well-deserved 2:1 (22-25).

Caprara was searching for more consistency and Bosetti eventually joined the game stabilizing the performance of her side in defense and reception, thereby paving the way for the 3:1 (25-22).