Bela Hobor, bid farewell to the Volleyball arena this past Saturday as he attended his last international match in Slovakia. The Middle European League fixture opposing Chemes HUMENNE to Austria’s Posojilnica AICH/DOB eventually turned into the place where he stood on the referee chair for the last time. 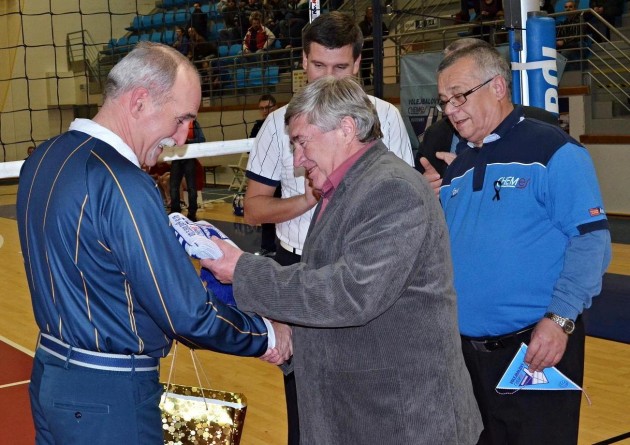 Slovakia and more specifically the Middle European League fixture opposing Chemes HUMENNE to Austria’s Posojilnica AICH/DOB eventually turned into the place where he stood on the referee chair for the last time. In 26 years of active international refereeing, Bela Hobor attended 901 international matches and the players of HUMENNE and AICH/DOB contributed a five-setter to also – somehow – pay their tribute to this great personality.

A few special guests got together to celebrate Hobor and to acknowledge his long and outstanding career in the sport. The list includes Mr. Laszlo Herpai – member of the FIVB Rules of the Game Commission, President of the Hungarian Refereeing Commission as well as of that same body in the Middle European Volleyball Zonal Association (MEVZA) – plus CEV Referee Delegate Stefan Hank, Igor Porvaznik – an international referee who is also the chairman of Slovakia’s Association of Volleyball Referees – and representatives of the local club.

A special dinner followed the match and there, in a sort of symbolic relay, Hobor presented his badge to Tibor Eva, a young referee from Hungary who recently fulfilled all conditions to start up his career as international referee and acted as second referee in Humenne.

As this Volleyball “adventure” comes to an end, the European Volleyball family would like to express its deepest gratitude to Mr. Hobor for his long and always professional contribution to the sport with every good wish for his future.

A short bio: Born in 1957, Mr. Hobor officiated at his first Volleyball match in 1977, i.e. by the time he was only 20. After his debut in Hungary’s highest division in 1984, Hobor joined the international referee candidate course (IRCC) held in 1986 in Sofia and was nominated FIVB referee in 1994. He attended 4 editions of the Olympics refereeing three times the final match – in Sydney, Beijing and this past summer London; he has attended about 1’000 matches in his home country, some 300 in the European Cups and about 600 in international competitions for national teams. He has refereed matches in every single edition of the FIVB World League since this elitist competition was established in 1990 for a total of 142 games, including 57 in the final round.