Heungkuk Life Volleyball Club is getting busy. As the time limit for Kim's transfer problem comes closer, they dealt a strong hand by the club affiliates visiting Turkey in person. Read latest volleyball news on Worldofvolley.com. 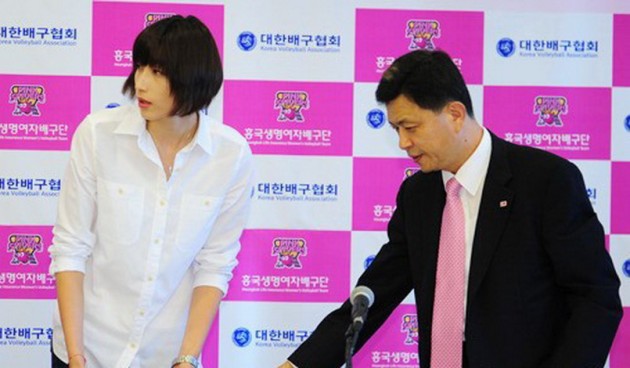 Kwon Kwang-young, the head of HKL, left for Turkey last week. He was shown on screen during the broadcast of the match between Fenerbahce and Vakifbank as well.

What is the reason that the general manager in charge of all club business would leave his seat vacant and make the move? The lack of time is the problem. October 23rd of last year, Ministry of Culture, Sports and Tourism, Korea Sports Council, Korea Volleyball Association and KOVO have announced that through discussion they have decided to issue Kim Yeon-koung a temporary ITC.

But there is a condition. The condition was as follows: “According to FIVB‘s authoritative interpretation, Kim will be under HKL and complete her transfer contract with Fenerbahce as a loan player within 3 months.” Also, it was revealed that “the federation will revise their FA regulation.”

3 months have passed since then. The agreed time limit is right around the corner, but there are no signs of resolution. Last week during the KOVO committee meeting, they pushed for FA regulation revision, but it was not realized. And that was just pertaining to the male athletes. The issue of women athletes’ FA regulation was not even brought up.

Kim Yeon-koung who has made her way to Turkey has been consistent with a non response. HKL club affiliate said, “We attempted to contact Kim many times, but have not been able to. Because time is running short, the general manager will be going to Turkey in person to talk to Kim to resolve the problem.”

General manager Kwon is expected to return (to Korea) on the 23rd. However, if the problem is not resolved as planned, it’s expected he will return later.

In the meanwhile, during a league game held at Burhan Pelek Voleybol Salon vs. Vakifbank on the night of 21st in Korean time, Kim Yeon-koung was in full blast scoring 29 points, the highest score between both teams. However, the team lost with set score 1-3 and remained in 4th place in the league.

GER W: SCHWERINER SC needs away win or lucky golden set to make it to next round