Dominican Republic’s Libero Winifer Fernandez was named the Most Valuable Player of the Baja California Volleyball Cup that concluded on Sunday at the High Performance Center. This and other volleyball news read on Worldofvolley.com. 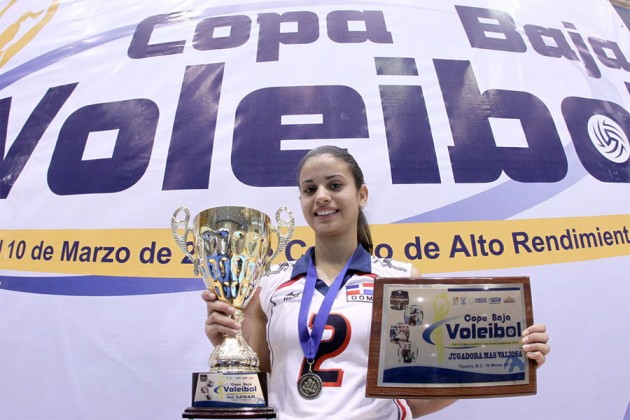 “This tournament was a great experience for us, it was also the first one of the year and we feel very proud as a team,” Fernandez said. “We struggled a little in some matches, but finished strong, winning and that was the most important thing.”

Fernandez has received many awards in different International tournaments and is one of the youngest liberos from her country, as part of a tradition in this position, considering the roles played by Evelyn Carreras and Brenda Castillo, who represented the Dominican Republic in Athens 2004 and London 2012 respectively.

“I feel so proud about playing this position, for every goal you achieve, this takes you to the next step, willing to work harder, to be more active and to be full of energy for every challenge ahead.”

After this tournament, the Dominican team will go to Cuba in a few days to compete at the U-20 Pan Am Cup, along with Mexico.

Talking about the support of the Baja California fans during the Cup, Fernandez stated: “We hope that they keep on following and supporting volleyball, a very beautiful sport and we also want to say thank you for inviting us to this competition.”