By winning the 3 points from last match, Belgium positioned itself as third in the current standings, well in contention for a spot in the semis. It presented the hosts from Bosnia and Herzegovina their third loss in the tournament by defeating them 3:1. Bosnia and Herzegovina’s captain Muris Krivokapa became the game’s top scorer with 20 points. 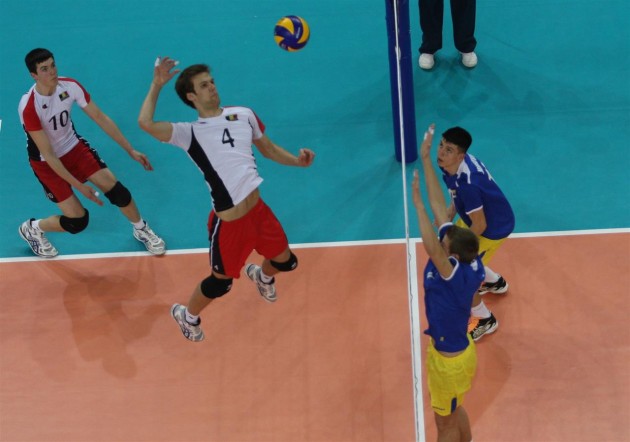 The score in the first set developed evenly only through the first technical time-out. As captain Sander Depovere’s serves gave Bosnia and Herzegovina a lot of hard time, Belgium made 7 consecutive points to take a 12-7 advantage. Its performance in offense was way more productive with the efficient spiking by Thomas Konings and Jonas Colson. The gap was gradually extended to 9 points as Lowie Stuer found an empty spot in the opponent’s half to cleverly put the ball away for the final 25-16.

The Belgian domination continued through the second set. From the very first rally Steven Vanmedegael’s team took the lead and did not let it go through the end. Bosnia and Herzegovina also helped by making too many mistakes to fall way behind in the score. A fantastic strike by Thomas Konings shaped up the final 25-14 in the set.

The roles were completely switched in the next set. The home team took total control of the scoreboard. Bosnia and Herzegovina stepped up its blocking efforts while captain Muris Krivokapa scored point after point in attack. Substitute player Milenko Simikic’s serving did not make it any easier for the Belgians as they trailed far behind their opponents. Dušan Kuzmanovic’s explosive hit off the block stamped the win for his team at the convincing 25-13.

But this third set turned out to be just a small bump on Belgium’s road to the victory in this match. In the fourth set things went back to the way they were and the Belgians mercilessly crushed their opponents. Jonas Colson put an end to the demolition work as he attacked successfully to close the set at 25-13 and the match at 3:1.

Steven Vanmedegael, head coach of Belgium: “This was a good game and we played well. It is important for us to win every game because Italy lost to Poland today, and if we win in the next two games we can go into the semi finals. That was our dream from the moment we started practicing. We have to stay focused and do our best because the teams that await us are extremely good.”

Ljubisa Ristic, head coach of Bosnia & Herzegovina: “When young players play, the game oscillates a lot. We started the game well, but did not continue to play that way. I did not expect that the boys would get back in the game and win the third set which they played without error.  However, we are not that good to keep playing at that level, and we lost the fourth. I would like to say congratulations to the team of Belgium.”

Sander Depovere, captain of the Belgium: “The first two sets were really good. In the third set we had problems. Our settings were not good, but we got better in the fourth.”

Muris Krivokapa, captain of Bosnia & Herzegovina: “In the third set we showed that we can deal with a team like Belgium and I am glad we won. We did not play enough games together.  Teams like this should play together for about a year while we have been together for about 15 days. I think that lack of experience was crucial to our defeat.”

To read more about this competition click on Youth European Championship 2013 M.

From the Mailman to a businessman, Karl Malone still delivers the goods

NORCECA W: Coaches are ready for the...