Slovenia emerged as the winner of this exciting five-set roller coaster against Belgium. The Belgians could have made a huge step towards the semi finals, had they won the three points from this match, but now they have to overcome Austria tomorrow to secure a place among the best four in the championship. Read latest volleyball news on Worldofvolley.com. 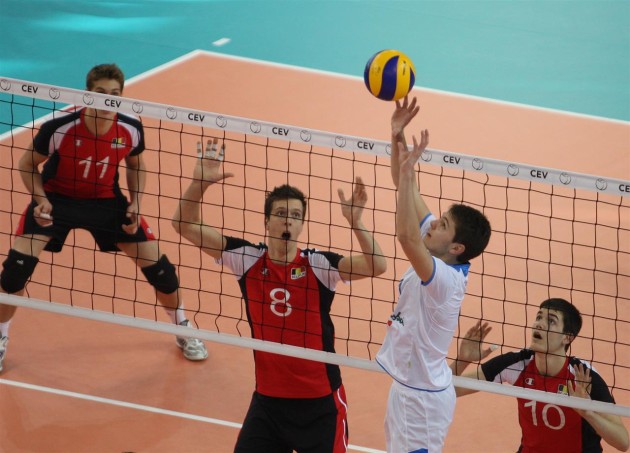 Toncek Stern contributed 19 points for the Slovenian victory and topped the scorers’ chart of the match, while Arno Van De Velde was responsible for 18 of the points on Belgium’s tally, including 6 aces and 7 blocking kills.

The first set as a whole was very close, with a slight advantage for Slovenia. It was Toncek Stern whose great spiking efforts brought 7 points to his team’s score in this set. The Slovenes saw their lead disappear as Belgium scored 4 points in a row with some strong serving from Arno Van De Velde to tie the score at 14 each. The battle continued for every point until the score was again in equilibrium at 22 each, but then Slovenia scored 3 in a row with Jan Kozamernik’s block putting the ball on the floor for the final point.

As Belgium greatly improved its blocking performance in the second set while Slovenia stepped up its serving power, the battle on the court became even fiercer. After several changes of the lead, Iztok Ksela’s boys got to their first set point at 24-23. They did not take advantage of it, but took advantage of the next one to close the set at 26-24.

With its back against the wall, now Belgium had no other choice, but to increase the pressure. The team of Steven Vanmedegael took control over the next two parts of the match. In the third set they established domination thanks to their improved offense and Arno Van De Velde’s prolific serving, and in the fourth their block was like a wall for the Slovenian attacks and their game was almost flawless to convincingly win by 25-15 and 25-14 and set the stage for a decisive fifth set.

Slovenia came out more concentrated for the tie-breaker and took an early lead. Belgium trailed close behind and eliminated the gap during the mid section of the set, but was never able to take over. Its players made too many errors and this is actually how they scored Slovenia’s last point for 15-12 and gave the victory to the opponent.

Iztok Ksela, head coach of Slovenia: “It was a tough game. Preparation for this game was very well done. The first two sets were played as we planned. After that, they were serving much better, so we lost two sets quite easily. Somehow we succeeded to win the fifth set with six guys who had never played together before. I am happy because we won this game.“

Steven Vanmedegael, head coach of Belgium: “We knew that it would be a tough game. They have been serving well during the whole tournament. We came back in the third and the fourth sets, playing our game. But in the fifth set anything can happen – it can go either way. We made some mistakes and we lost. Tomorrow we are playing against Austria, so we have to win if we want to reach the semi finals.“

Jernej Vrhunc, captain of Slovenia: “We played well in the first two sets, but then our concentration was on a very low level in the next two sets. Luckily, we managed to play our game in the last one and we won.“

Sander Depovere, captain of the Belgium: “The Slovenian team was really on a roll, but we managed to break them in the third and the fourth set. Unfortunately we lost the tie-breaker. Tomorrow we have a very important game. If we win, we go to the semi finals, so it is the most important one for us.“