The hosts of Serbia conceded one set to their rivals from the Czech Republic but won 3:1. This is their second win on the 2013 FIVB Volleyball Men's U21 World Championship - European Qualification tournament. Uroš Kovačević and Michal Finger were the top scorers. 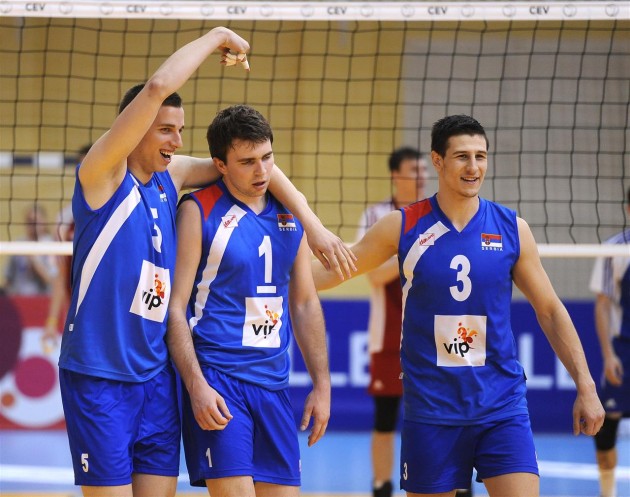 Serbia overpowered the Czech Republic 3:1 (25-21, 24-26, 25-23, and 25-15). Serbia’s captain Uroš Kovačević (pictured) topped the scorers’ chart with 22 points, while Michal Finger scored 21 for the Czechs. The match was followed by 450 spectators, including Mr. Raco Sekulić, Deputy Mayor of Ivanjica, who was in company of Mr. Miroslav Ristić, team manager of the Serbian junior men’s national team.

In the first set, the Czech Republic started very aggressively creating a minimal gap, which they managed to preserve until 13:12. Then, Serbia won 4 points in a row and reached the second technical time-out leading 16:13. From that moment on, Serbia controlled the game and wrapped it up at 25-21 to take a 1:0 lead in sets.

In the beginning of the second set the Czech Republic got off to an early 4:1 lead, forcing Siniša Reljić to call for a time-out. Serbia never quite managed to get back into the match, and the Czechs successfully maintained the gap all the way through the second technical break (16:13). After the pause, the home side reached the tie at 18:18, and then took over the lead at 19:18. The teams played point-for-point, but it was Serbia that reached the first set ball at 24:23. However, the hosts did not use this opportunity to end the set, and the Czechs stormed to 26-24 scoring three consecutive points to equalize the match.

The Czech Republic led for most of the time in the third set. They even had the advantage of 23:20 in the closing stage, but then Serbia started to play their recognizable game, scored four points in a row and reached the first set ball at 24:23. Serbia’s team captain Uroš Kovačević wrapped it up immediately for a 2:1 in sets for the home side.

The start of the fourth set was marked by ups and downs from both sides. The Czech Republic led 6:5, but Serbia went to the first technical time-out leading 8:6. After the break, the home side continued extending the lead. At the second technical break it was 16:9 on the scoreboard for the hosts of the tournament. Serbia then routinely brought this game to an end at 25-15.

Siniša Reljić, head coach of Serbia: “I was a little bit afraid of this match. I saw the Czechs playing yesterday against Spain, and I knew that it wouldn’t have been easy today. We lost the second set because we were out of focus, but I think the third set was decisive as we managed to overturn the score when it seemed almost impossible. I congratulate my boys, and the Czech players who played a fantastic match. In the end, I think that the better team won.“

Uroš Kovačević, captain of Serbia: “We wanted to win this match so bad. We started well, won the first set with ease, but then in the second set we were a little bit unlucky. So, the third set could go both ways, but we always deliver when it is most needed and that is our main quality. We are happy with this victory and we are confident before the deciding matches.“

Petr Juda, head coach of the Czech Republic: “We played better than yesterday. We had our chances, and we managed to win a set. However, Serbia was better today and I congratulate them.“

Czech team captain Adam Zajicek: “We played well today, the atmosphere in our team is good, and I think that we could have won this match. Unfortunately, we were unlucky and I congratulate Serbia on their victory.“